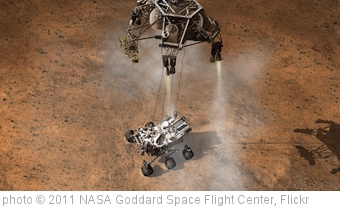 Late on August 5, 2012 NASA’s Curiosity Mars Rover landed in Quad 51 of Mars. The rovers primary goal is cross Mars capturing photos and even video on the never before seen land.

So how is Yellowknife connected to the Mars exploration? Well, NASA has officially named Quad 51, where the rover landed, Yellowknife. They have named it after Yellowknife, Northwest Territories because this is the area where the oldest rocks on earth was discovered (except it was actually further north).

They are almost 4 billion years old,” said Dawn Sumner, a Curiosity project scientist from the University of California-Davis. “The rocks we’re looking at on Mars are also billions of years (old) and so there is a nice relationship that way.”

Yellowknife, the city, came by its name because of the local Yellowknives Dene. The First Nations group use to make copper knives for tools when roughly looked like yellow knives.

How Yellowknife gets this kind of attention for a city of 20,000 people in the middle of Northern Canada I will never really understand but today I’m proud to a Yellowknifer.