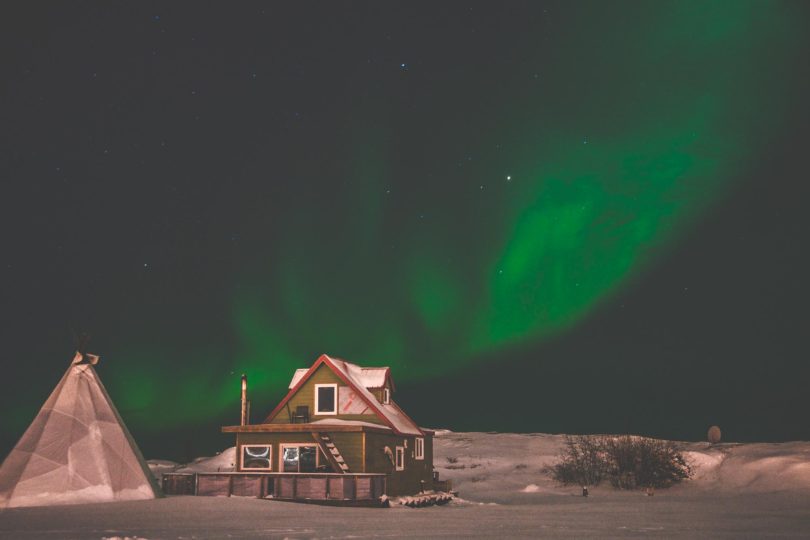 Quick facts about Yellowknife in January

Weather, daylight, and Aurora in January

Welcome to Yellowknife in January. It is a month of contrast. On one hand, daylight is coming back at a rapid pace going from just under 6 hours to almost 7.5 hours of daylight by the end of the month. The weather is often crisp and filled with bright clear sunny skies, for those short hours the sun is out, which also helps at night for your chances to view the aurora borealis. However, it is also the heart of winter for Yellowknife. After the hype of the holiday season, January can seem long, cold and isolated. To add to this, Yellowknife celebrates no statutory holidays in January, making the month even longer.

Some Yellowknifers take a page from our circumpolar counterparts in Denmark and practice hygge. The idea of snuggling up by the fire, getting cozy with a hot beverage and hosting endless dinner parties. On the other hand, many Yellowknifers embrace it. They bundle up and head out. They go snowmobiling, skiing, snowshoeing, ice fishing, fat biking. The possibilities become endless when winter is embraced. And at the end of the day, you’ll probably find them reminiscing at a local watering hole.

So, strap up, let’s get into January in Yellowknife.

Temperature wise we are looking at an average of -27.9°C. Some days might be warmer and some days it might be colder, much colder but this is the heart of winter in Yellowknife.

At this point in the winter, Yellowknife has received the majority of its snowfall. The dry, light snow will most likely be packed down in most places you come across unless you are exploring some untouched lakes and trails.

On a warmer day, there might be a brief period of snowfall, but it will be unusual. Because of the colder temperatures, there is a greater chance of clear skies during the day and night.

Quick Facts: Snow covers the ground, roads, and lakes. All lakes are frozen.

The average number of nights the aurora has been observed in January in Yellowknife is 19.7.

This number comes from local organization, Astronomy North. They, through a series of partnerships, have been tracking the observation of the aurora borealis just outside of Yellowknife from September to May since 2011.

January is right in the middle of the winter aurora season in Yellowknife and is often an ideal time of year to visit Yellowknife if you want to see them.

There are many tour operators who offer aurora tours with varying options from small groups to large and chasing/hunting/roaming tours to stationary tours, such as ones at a tent, cabin or lodge.

If you are interested in seeing the aurora on your own, such as if you rent a car, we have developed our Aurora Viewing Locations and Tips Guide. 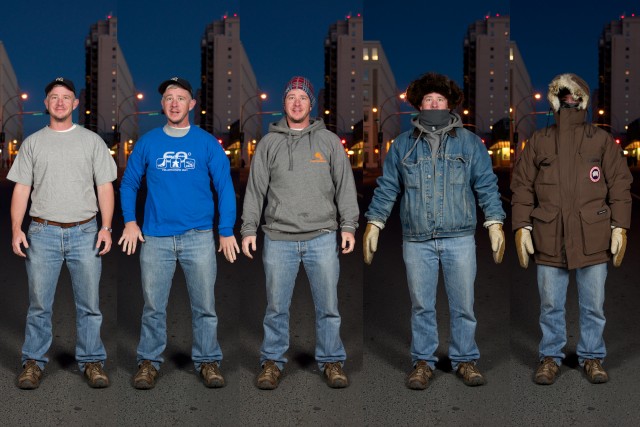 What to wear in January

Eventually, we will write a specific article on the proper way to dress for a Yellowknife winter, but for the time being here is some advice:

Your base layer should be skin-tight or close to it so that moisture doesn’t get trapped right against your body. Merino-wool is often hailed as the best material for this, but other synthetic fabrics also work. Avoid cotton.

Your middle layers, note that you can have multiple middle layers, should be something like a long sleeve shirt, flannel shirt and/or a fleece sweater. You want these layers to be very breathable so moisture can escape. We often wear two or three middle layers and add to them as it gets colder.

Your outer layer is referred to as your shell. More often than not in Yellowknife you will notice this being a goose-down Canada Goose jacket. They are by far the best for sitting around and aurora gazing. If, however, you’re actively moving, something lighter might be more ideal. This layer should protect you from the snow and wind but also keep in your body heat.

For snow pants, we go with a simpler two-layer system. A thermal base layer and an outer layer, you can, of course, add middle layers.

Let’s not forget your extremities. You’ll want a windproof hat, or toque, scarf/neck warmer/balaclava, and mitts, not gloves, or at least small gloves with larger mitts over them. Your boots should have good insulation. You will be standing a lot and maybe in the snow. Sorels, Stegers or mukluks are all a good idea. Hiking boots are NOT recommended for long durations outside.

What if you don’t have any of that and don’t want to buy it? There are places in Yellowknife that rent winter clothing.

What else should you pack?

Now that you have your winter clothing covered, what else should you bring to Yellowknife?

Camera – This is a must for any trip but if you want to take photos of the Aurora you will need a camera that you can control the ISO, Aperture and Shutter Speed

Extra Camera Batteries – Your camera will be outside as much as you will be, extra batteries will help combat the cold temperature.

Tripod – If you want to get stable photos of the aurora borealis a tripod is almost a must to get your camera still enough for longer exposures.

Sunglasses – Funny to think at a time of year with so little daylight you would need sunglasses but when the sun is out and bouncing off the white snow it can be blinding. You’ll thank us later.

Hand-warmers – Pro tip even if you have great gloves or mitts. Hand-warmers are a lifesaver in those moments when your fingers or toes just won’t work anymore. Or look up our friends at Aurora Heat for a northern take on hand-warmers.

Extra Socks – Never put on socks that might be damp. Fresh socks will help keep your feet warm, even if you are changing them multiple times throughout the day.

Long Johns – These should be included in what you’re wearing already but long johns are essentials for keeping you cozy no matter where you are.

Moisturizer – Yellowknife has a dry climate and your skin can dry out quickly. Pack yourself a moisturizer of choice. Lip balm is also widely used in Yellowknife.

Snacks – Odd thing to pack, but if your flight is arriving or departing very late at night or early in the morning sometimes there is nowhere to eat. Simple snacks will help you get through those times. Or when you’re out exploring the wilderness.

Flashlight or Headlamp – It is dark here, we have established that. A flashlight will be your best friend when trying to adjust your camera settings in the middle of the night. Or for light-painting while you wait for the aurora to come out.

Things to do in January

Take hint form any local you might encounter and embrace winter. Walk, ski, bike or explore Yellowknife by any means. Wander through downtown and the historic Old Town, or pick a couple activities from our list below and just get out there. You will thank us. The views are pristine and surreal. These activities will keep you moving and warm, but they will also make you work up quite the appetite.

2. Explore the Culinary Marvel that is Yellowknife

You wouldn’t expect this, but Yellowknife has one of the most diverse culinary scenes in Canada, rivaling big cities like Toronto, Vancouver and, even, Montreal. From Vietnamese and Ethiopian to Northern Fare and just good diner food with a twist. Put on your stretchy pant… or longjohns… and get ready to eat.

3. Nestle into a local pub

If you really want to do as the locals do. After a long day of exploring around Yellowknife, or on a night you aren’t heading out to see the aurora, pick a pub and nestle in for the evening. Whether you are with a group of people or by yourself, Yellowknife will welcome you and by the end of the night you to will feel like a local. Or at least like you’ve made a couple new friends.  Did you know that Yellowknife even has a beer brewery? Not a fan of the pubs? We also have more coffee shops throughout downtown and Old Town than you can count on one hand. 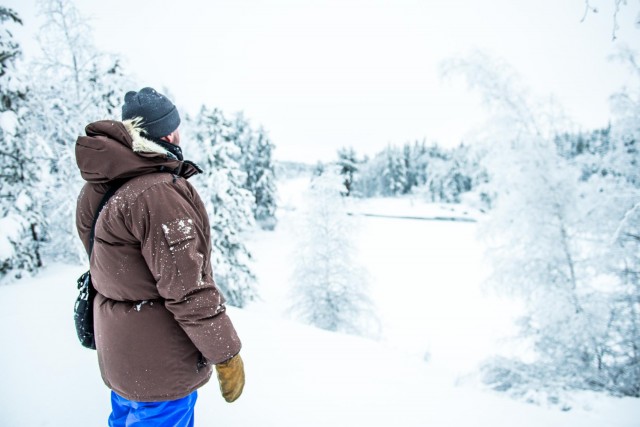 Activities to do in January

These are activities that are specific to January or the season. There are often many more things to do in Yellowknife that are not dependant on the month or season.

Hosted by the City of Yellowknife around 8 pm on December 31. They are an annual occurrence that happens on Frame Lake to ring in the new year.

This event is always highly anticipated by residents of Yellowknife. Tickets go on sale in December and are often sold-out within a day or two. Tickets are only available at Overlander Sports. 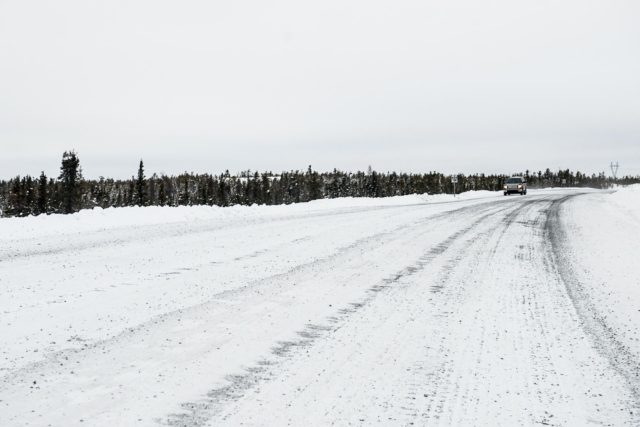 Things you cannot do in January

If you have decided to rent a car during your stay in Yellowknife here is a little about the road conditions in and around Yellowknife during the winter. These conditions are pretty much the same from December to March.

In the city, you might notice that many of the roads are not actually plowed down to the asphalt. Instead, the snow is packed down and occasionally graded to keep level. The snow can then be very slick and while the municipality does lay down gravel to create traction you should be more cognizant as a driver while on the road:

When coming to stop or the need to slow down, give yourself more distance than normal. Lightly apply your brakes to slow down. If you slam on your brakes you will most likely break all traction and start sliding, even with ABS and winter tires.

When starting from a complete stop and you notice that your tires are spinning – your speedometer will go up while you’re barely moving – back off the gas pedal. Let your tires get traction and then continue to accelerate.

Be aware of where turning lanes are. Franklin Avenue in the downtown core has 5 lanes. Two lanes going either way, with the outer lanes being metered parking most of the day. The lane in the center of the road, which is often unknown, is the turning lane for the side streets. Be aware and don’t block the flow of traffic.

Road conditions on the highways are often very good, except for during and right after a good snowfall, but those are rare. The highways, including Highway 3 and Ingraham Trail, are maintained by the Territorial Government, so are plowed regularly.

Shoulders can be soft though and can easily suck in a vehicle if not careful. You should not be parking on the road along the Ingraham Trail so this should not be a problem.

Slowing down on bends in the road is wise as conditions can still be slick even if plowed.

Have something to add? Leave us a comment or send us an email.