Another Canada Day is now over, and a lot of fun it was. The day was made of tons of entertainment and activities for everyone. It seems as though everyone enjoyed themselves and didn’t let the scare of rain stop them from coming out and celebrating. 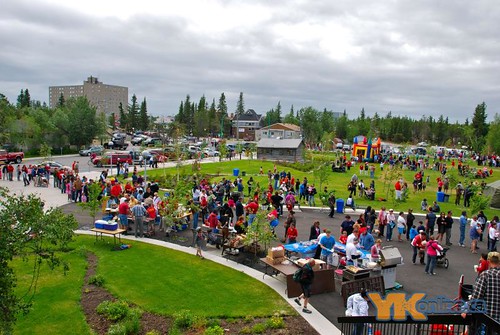 The parade started off the day. Before it started I set up at the corner of Franklin Ave and 53rd St while it was sunny and warm. Sure enough as soon as the parade approached my location the clouds moved in and the wind picked up. Did I mention that Franklin Ave makes a half decent wind tunnel. Anyways, the parade itself was awesome. I think it was the longest parade I have experienced in Yellowknife. It was full of many groups who wanted to come out and show their pride and what Canada means to them. Floats, costumes and demonstrations were all done very well. A big hat tip to the Yellowknife Rotary Club who once again did an excellent job rounding up people and putting together the parade.

As soon as the parade ended it was a massive wall of people walking towards the Somba K’e Civic Plaza for more Canada Day festivities. At one end you had the popular food vendors like The Fry Guy, Hot Dog stand and Ice Cream Truck. While at the other, in front of City Hall, non-profit groups like Mission Work for Belize, The Rock Skateboard Ministry and Nursing Group were selling bratwurst, donairs, baking, jam, and so much more good stuff. In the middle were some tables for people to eat at, as well as some kids activities to keep them busy.  The amphitheater was were all the real action was though.

Emcee Paul McMullen was on the horn making sure people were paying attention. Some of the performances that took the stage throughout the afternoon were the Dene Drummers, Priscilla’s Revenge, Godson and the Zomba Class, which included the worlds luckiest man. A little later on it was time for the finale of the Music in the Park 2010 competition. The final six performers, Ronna Kingsley, Jairyn Brake, Darin Woodbury, David Strouse, Climbing Giant and the Beat Officers, got to play two songs for the crowd and judges. The judges being Glen Abernathy and Shannah-Lee and Ashley Brown from CJCD. All the performers did a wonderful good at portraying themselves and their music. A crowd pleaser was definitely David Strouse, which is made up of Aaron, John and Caleb. They were able to keep it together as they rotated instruments and even shared them at the same time – see the photos below. At the end of the day it was Jairyn Brake who earned the Grand Prize. She came short last year, but came back this year with force. Make sure you keep an eye out for her album in the coming year.

Fortunately for everyone the weather held for the day. Clouds would come and go but the rain just stayed away and we are thankful for that. I had a lot of fun celebrating Canada Day with the rest of the community. Did you? What did you think of Canada Day this year?

Click on a photo to see a pop out bigger version or view all of the photos on Flickr.