Don’t think this is a Joke, there is indeed a new iPhone out. The best smart-phone, according to Consumer Report, which also suggested you not buy it, was released one week ago in Canada. This maybe a confusing to some as it was only last November that Yellowknife first got the iPhone, but it has actually been about a year since the old iPhone was released (one a year, since 2007). You probably remember when Bell made the switch to its new “beefier” network, which of course supports the iPhone. This post is my, very basic, review of the iPhone 4. To you Blackberry Addicts and “open” Android Lover out there, I’m sorry. Although if anyone wants to send in their review of the new Blackberry, by all means.

To start off, when I bought the phone I got a nice surprise from Bell. I thought I was going to have to buy the phone out right, which was a whopping $650.00, but thanks to some hardware and data upgrades I was able to walk out of there only paying $150.00. Needless to say I was happy. I was also happy right away about how well the new Retinal Display looked on the new phone. When compared side-by-side to my old 3GS you could see how much clearer the screen was. I still notice its clarity a week later and it is a feature that makes the phone feel high quality.

The next thing I have to address is, of course, the antenna issues that were widely spread throughout the USA. That being said, it was reported that all those antenna issues only amounted to 2% of the iPhones that were sold. I, myself, have not experienced any of these issues. I have even tried to get the phone to drop bars but nothing happens. I did notice, though, that since Apple pushed out the iOS 4.0.1 (iPhone Operating System) update the bars on my phone now go up and 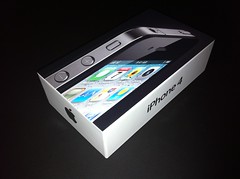 down more often. I work in a concrete basement, so now I see a drop of one bar, while down there. I do not and have not dropped any calls, anywhere, nor have I heard a loss of quality in the call. It was recently brought up in conversation that, there had not been many, if any, reports of antenna issues outside of the USA. This has led many question AT&T as to their service. If by chance you are noticing antenna issue, though, the best solution is to just put a case on the phone. I recommend this anyway, I certainly use one.

Another noticeable highlight about the most recent of iPhones is the battery life. Having had the iPhone for one week now, I have only charged it ONCE since walking out of the store with it. It has spent minimal time connected to the computer and is only charged when completely dead. That being said, I am not a big talker, but do use the phone on a fairly regular basis for Twitter, Facebook, Video and many other applications. I’m sure if you use a feature like FaceTime it would get used up more. FaceTime is another feature I think I underestimated, but have yet to actually try it. I liked the idea of a front facing camera, but didn’t think many people would actually use it during calls. I think I was wrong, so far I have heard nothing but good reviews about this feature. I have, although, heard grumbling as well, especially about the fact it has to be used over wifi and you can only call others who actually have an iPhone.

Now were going from the front camera to the back camera. This is where I got excited. I am someone who creates a lot of online video, vlogs if you will, and having a camera with 720p HD capabilities built into my phone makes creating a lot easier. Before I use to carry around another pocket camera, but since that one broke, I have started to use the iPhone, which does just as good, if not better when recording. The camera now takes 5 megapixel still images and produces pretty awesome photos. With the built-in Flash/Light it can now be used anywhere.

I, personally, love the iPhones because of the ease of use, thousands of apps, and overall performance of the device. I do recommend it, yes, but realize it may not be for everyone. Adroid lovers, I know you like your open platform, and Blackberry Addicts, I get your obsession with that tiny keyboard that can get you through a bunch of emails while your on the can. I get it because it is how I am with the iPhone 😉

You if have any question, please let me know in the Comments below.

This review was originally posted on WithMedia.ca. WithMedia.ca the business behind YkOnline.ca and is also a New Media/Online Content Creating website and blog. It offers a content about everything from New Media, to the WordPress Blogging Platform, to how to properly leverage Social Media. If you are interested in talking to Kyle about any of that give him a call at 444-0901