I’m sure most of us, at one point or another, get tired of our jobs. We don’t enjoy it anymore, it makes us miserable, it is too easy or we just get too comfortable. Well that is exactly what happened to 32-year-old Dave Conroy when he turned 30.

He was living in Vancouver working in the Information Technology industry and worked from home. His commute in the morning was a mere 15 steps. He said when he turned 30 he needed a change. In his words he needed to press the reset button. That’s when he took up biking. With minimal research he said he got a bike and one thing led to another and soon enough he was biking across Canada, then possibly the world.

It didn’t just happen over night though. For a little more than a year and a half a lot of planning and prep was put in place. While sentimental items might have been put in to storage, most of it was sold. Eventually the bed and house were sold as well. That is when Dave knew it was real.

Dave first came on my radar back when he first left on his journey in April, from Vancouver. He had mentioned Yellowknife as a possible destination, which came up in a Google Alert. I looked through his website, TireofIT.ca, which has a lot of his stats, reviews, video and blog posts. It was interesting, but no date was mention as to when he might me in town, so gradually I moved on. That was until, I got an email from Dave, and I jumped at the chance to hear about his journey of a life time.

We got together one afternoon and created the videos below. The one thing that I think will interest a lot of people is Dave’s take on bicycling to Yellowknife. I often think Yellowknife is missed on tours of all kinds, just because we are the end of the road and so far away from anything.  Bicycling to Yellowknife presents several risks, due to the lack of services and people and places. It is also a real downer to think you have to travel back the same road you came on. That being said, I got the impression that Dave was glad he came. He said “the reward at the end of the road was greater than expected”. Mentioning that within only being in town for a day or two he had found a place to sleep and was invited to a traditional fish fry. To top that, Yellowknife made such an impression on Dave, he will be flying back for a visit in the coming weeks.

Watch both video below to get a full idea of what it is Dave is doing and why (If you can’t at work, bookmark for later). Make sure you follow Dave on his website, Twitter and on Facebook. 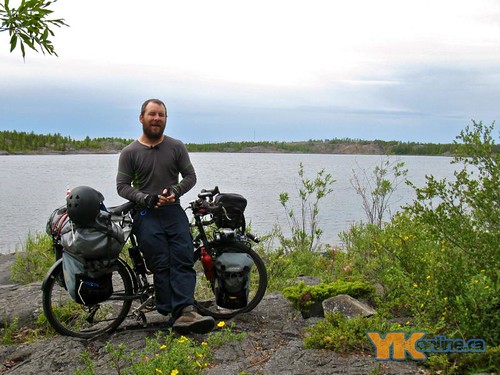 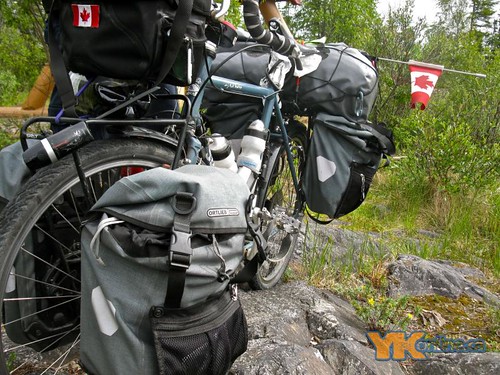