[box]With the opening of the Detcho Bridge over the MacKenzie River the ferry is no longer in service.[/box] 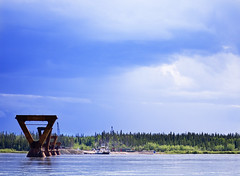 Normally it is a twice a year occasion, where both the Merv Hardy Ferry and the Mackenzie River Ice Road are out of service. What does this mean for Yellowknife? Well we have no road access and when most of are amenities are trucked in, can be a bit of an issue.

If you are new to Yellowknife, you may be thinking “Oh know what are we going to do, everything is going to be really expensive”. Yes and no. You may notice that Wal-mart starts to collect trailers in their lot, which contains stock to keep them going through freeze-up/break-up season. Most big stores like Wal-Mart along with the Grocery Stores try to make sure they are stocked up before hand, but it is hard to guess when the access will be cut off and for how long. Co-op tries to ease the frustration by flying food and supplies over the river and although this costs more the store itself absorbs the cost. Therefore there is not price change on the customers end.

Gas Stations are another service that try to keep topped up as much as possible during these times. Although don’t we have a huge tank farm out behind the Sand Pits?

Since this has happened for many, many years. More like, the entire time Yellowknife has existed, the City has adapted to it and everyone is use to it and for the most part can continue on with there lives undisturbed. Unless of course you had plans to drive south of the Big River. If by chance you are paranoid and want to play it safe, go out to the store now and buy enough food for two weeks and fill up the car.

Actually I don’t think it will even be two week. What I don’t think many people know is that they have been building the Ice Bridge across the river for a couple weeks now. The Ice Bridge is built a KM or so up river which allows them to start construction on it, while also keep a path clear for the ferry. If you ever get a chance to see the ferry operating this time of year it is quite neat. On occasion they put a back hoe onto the ferry to move ice that may be in the path across the river.

Personal my life isn’t affected, sometimes when I’m not paying attention I will miss the occasion altogether, which isn’t a bad thing. Although I’m not affected doesn’t mean you aren’t. Does this inconvenience you in any way? Do you care? What tips would you suggest to people about Break-up/Freeze-up time?

Leave a Reply to YKguy X