One of Yellowknife’s best restaurants and oldest is the Wildcat Cafe. It is a rustic looking log building that is also a national historical site.

I had not been to the Wildcat in a long time and I thought it was time to break that and go enjoy a lunch there. The Wildcat is open seasonally, starting at the end of May and going to September. The restaurant is open from 7am through to 10pm at night every day of the week. 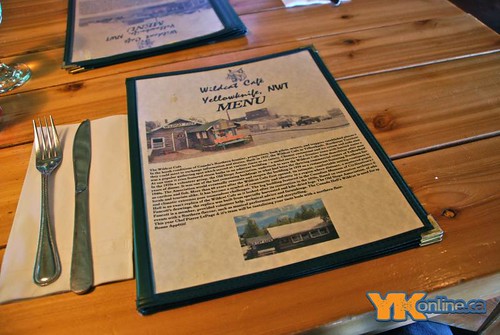 There were many choices for lunch. Everything from Muska-boutine to a Buffalo Burger, or White Fish to more traditional items. I chose the Buffalo Burger as I couldn’t resist the sound of sautéed Mushrooms and Onions. The price of the burger was $17, which for my budget is a little much, but like I said, I couldn’t resist. 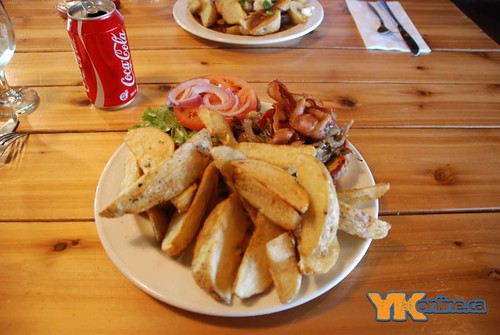 I was surprised at how quickly our food was prepared and served, but that could have been because the restaurant wasn’t that busy. I good tip would be to not go between 12 to 1 for the best service. Which was awesome, as there isn’t much space for the waitresses to hide.

Back to the burger, which was huge. So here is what you get: a thick juicy buffalo patty, sautéed mushrooms and onions, 3 strips of crisp bacon, red onions, lettuce and a slice of tomato, all between a thick fresh bun. That is not all of course, as a side you get gigantic french fries. I’m not sure if there is even a way to describe them other than huge. These fries were probably an 1/8th of a large potato each. I guessed that I had 2.5 large potatoes on my plate. This was also an unfortunate thing. There was no way I was going to be able to finish them, not if I planned to finish the burger, which I was.

The burger its self was fabulous. The meat was cook all the way through, but not too much that it was dry, the mushrooms and onions had simmered to perfection, by my standards, and the bacon was crisp, not crunchy or chewy, just right. Now if you put all that together, you will get an explosion of flavour with every bite. I know I may sound like a commercial, but it was that good! Then again, for $17 it very well should be. 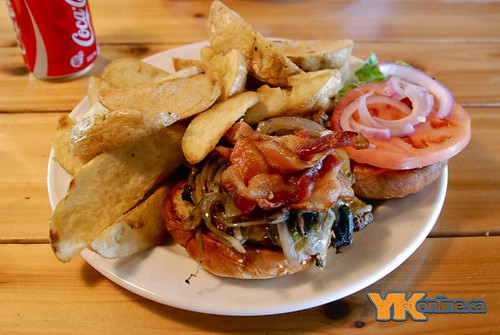 A meal of that size and proportion will fill anyone up. For a total of about $21 for lunch, I felt I was getting my moneys worth. So if you are touring the town, have a lunch meeting or just want to grab a bite to eat with some friends, I would suggest you try the Wildcat, at least once. If it is nice out, their patio is also a great place to soak up the sun, and what Old Town has to offer. 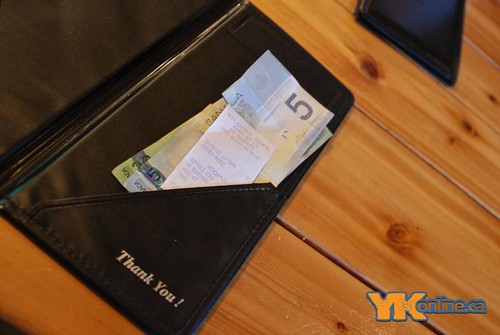 Maybe next time I’ll get invited back to do a full profile of the Wildcat Cafe.