What do you do when you have lived in the same area of town, that you absolutely love, for 37 years? You put together a photobook that shows how great that place is. This is exactly what Fran Hurcomb did with Old Town.

Fran has loved Old Town, Yellowknife ever since moving to Yellowknife those 37 years ago. However she didn’t move to Yellowknife for a job or for family; she moved to Yellowknife simply for a “Big Adventure”. She never imagined she would end up staying all these years. 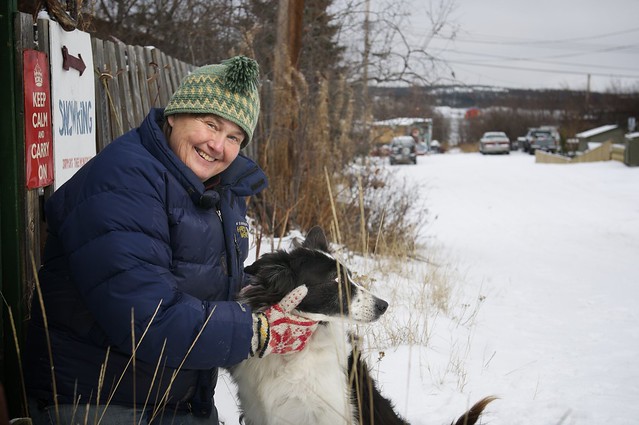 Being an outdoors enthusiast, Fran was drawn to Old Town because of the lake. Early in her time in Yellowknife she ended up with a dog team, which she fished for everyday for 20 years, so being right on Great Slave Lake was imperative. And as she spent so much time in the bush, she said it was just nice not to have to go through town on your way in or out.

Even before Fran started her big adventure in Yellowknife, she was taking photos; simple black and whites then but after moving to Yellowknife she started to upgrade her camera. She continued to take photos of everything around her. Where she lived, her dog team and the north. Fran was also known to develop her own film, which meant a darkroom and if you know anything about the Woodyard, you know there is no running water. So developing the film was an even bigger challenge as she had haul water herself at the same time but she did and it worked. 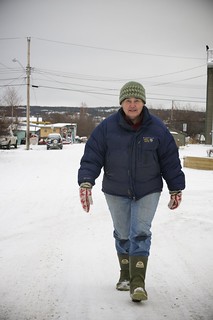 Over the next 20 years Fran kept taking photos of the north, its people, Yellowknife and especially Old Town. In 2010 she was introduced to the Facebook group YK Memories. The basis of the group was to share photos and memories of Yellowknife through the years and boy did Fran have photos to share.

The group was comprised of current Yellowknifers and those who had moved away but could never shake the feeling of YK. When Fran started posting her photos through the years, huge discussion erupted on them as the group would come together to talk about, identify and reminisce about each one. This was when the idea of a photobook started to be discussed.

Fran undoubtedly had one of the largest collections of photos of Yellowknife over the last 30 years but she didn’t know what the book would be about. She contemplated one about all of Yellowknife or maybe about her Dog Team of 20 years but ended up back at Old Town. The place that had really made Fran feel like Yellowknife was home.

So it began, the Old Town Photobook. Fran really wanted to tell the whole story of Old Town, which meant going back to the 1930’s, so between the YK Memories group and other Yellowknifers she was able to source many photos to show the full picture. Fran said the help was overwhelming; people would start looking anywhere for their old photos, even as far as digging under their homes for old keepsakes. Many would also scan and email her photos.

The YK Memories group would then help identify the photos to be sure they were accurate in time, location and subject. Fran said the book is truly a community guided one and she is very appreciative of all the help she received in putting it together.

In the beginning of October 2012 the final proof was sent to the printer and only a couple weeks later Fran was in possession of two pallets of Old Town Photobooks.

Today the Photobook is available at the Yellowknife Book Cellar here in Yellowknife and on their website www.yellowknifebooks.com. You may also be able to order the book from UpHere.ca.

While talking to Fran about her book we laughed as we discussed how we have crossed paths with so many ex-Yellowknifers who still stay connected to the community, so if you are one of those people, I encourage you to get a copy of this book.