It is not often anymore that the Ferry goes out unexpectedly, but when it does, we go on edge. Most of the time Yellowknife has enough supplies to get by, but when rumours of panic start floating around town, we all panic.

The Yellowknifer and CBC both did articles on panic to get fuel as the ferry is currently out, but I’m curious to know where the panic came from. Many people were saying that the scare started on Facebook and then spread through town.

The GNWT released a statement on the matter saying that if resident consumed fuel at a normal rate, everyone would have enough to get through while the ferry is out. Now I realize that this is hard to take in, especially when you know other people are out there filling jerry cans in the back of Ford Fusions. By the way apparently Ford Fusions are actually fairly efficient. Anyways, I think it is a little late for that though.

According to some friends, Co-op is out of fuel, Winks was low of the last bit of Premium, Petro-Can had line ups and Gas Town was limiting fuel ups to $40. No word on any of the other stations or card locks. Please comment with updated info.

As for food, Co-op has been flying food over from Hay River and will continue to do so until the Ferry reopens. As for Extra Foods, they’re shelves are starting to look bare.

The water levels are now on the rise again, and if they continue at the rate they are going, it is predicted that the ferry will be in operations by the end of the week.

Most long time Yellowknifers see this as no issue, and just go on with life and deal with it. While, I’m sure most are stocking up. How are you dealing with the ferry going out unexpectedly like it has. Has it ever affected your decision about living in the North? 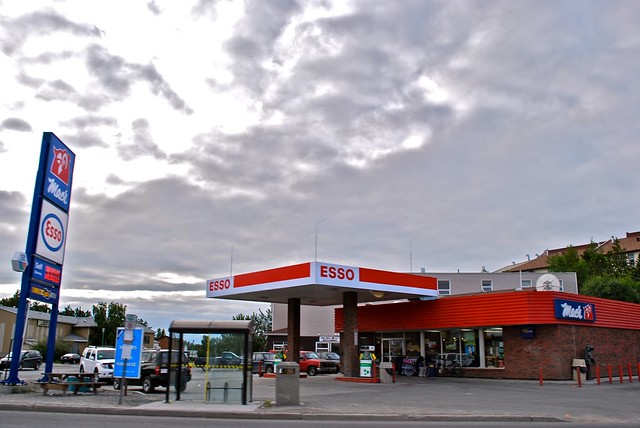